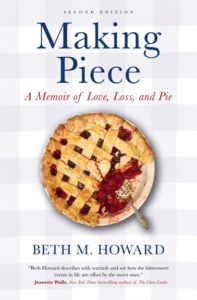 MAKING PIECE: A Memoir of Love, Loss, and Pie

Available for at bookstores and libraries everywhere. Order now at Amazon and IndieBound.

“Beth Howard describes with warmth and wit how the bitter events in life are set off by the sweet ones—much like the ingredients of a good recipe. Making Piece is a moving account of love and loss.”

FROM THE BOOK JACKET

Journeying through a grief that at times seems unbearable, Making Piece introduces a superb writer who used America’s quintessential comfort food—pie—to heal her heart, reconnect with people and find her way back after suffering a devastating loss. When journalist Beth Howard’s young husband dies suddenly, she packs up the RV he left behind and hits the American highways. At every stop along the way—be it shooting a pie documentary or handing out free slices on the streets of Los Angeles, Beth uses pie as a way to reach out and find purpose. Ultimately, Howard returns to her Iowa roots and creates the perfect synergy between two of America’s biggest icons—pie and the American Gothic House, the little white farmhouse immortalized in Grant Wood’s famous painting, where she now lives. During the summer, she runs the Pitchfork Pie Stand, which bears her living motto to “pie it forward” because she believes pie heals and makes the world a better place. Making Piece powerfully shows how one courageous woman uses the simple act of giving to others to triumph over tragedy. It tells of the role of fate, second chances and the strength found in community.

I blame pie. If it wasn’t for banana cream pie, I never would have been born. If my mom hadn’t made my dad that pie, the one with the creamy vanilla pudding, loaded with sliced bananas and covered in a mound of whipped cream, the one that prompted him to propose to her, I wouldn’t be here. Think about it. The anatomical shape of bananas. The pudding so luscious and moist. The cream on top as soft as a pillow on which to lie down and inspire certain sensuous acts. My parents were virgins and intended to stay that way until they exchanged vows at the altar. That pie made wedding plans urgent. If it wasn’t for that pie, they may never have gotten married and had kids, had me.

If I had never met Marcus, never fallen in love with him and his almond-shaped green eyes, exotic German-British accent and those odd-yet-elegant leather hiking boots that laced up at the sides, I never would have invited him to join me at my friends’ wedding in Tuscany. And thus, I never would have taken the train from Italy to his apartment in Stuttgart, Germany, carrying that pie I baked him, the apple one heaped high with fruit, drowning in its own juices and radiating the seductive scent of cinnamon, the one that made him realize I was like no woman he’d ever met before and that he couldn’t live without me—the pie that prompted him to propose to me.

If I had never been born, I never would have known what it feels like to lose Marcus, never known what his sexy, athletic body, the body I had made love to hundreds of times, looked like lying in a casket, cold, hard, lifeless, eventually cremated, his ashes buried, never to be seen again.If only my mom hadn’t made my dad that banana cream pie. Fuck pie.

I am a pie baker and I live in the American Gothic House. Yes, the American Gothic House, the one in the iconic Grant Wood painting of the couple holding the pitchfork. It is the second most famous white house in the U.S.A., second only to the White House. Yes, the White House in Washington, D.C. The American Gothic House is nowhere near Washington, D.C. It is located in rural Southeastern Iowa in a sleepy, former railroad town called Eldon (pop. 928), and while the house is indeed white, it is decidedly smaller and humbler than the presidential one. Because it is famous and old—old as in “built in 1881” old—it is listed on the National Register of Historic Places. But one doesn’t need documentation or a plaque by the front door to know the age of this house. The slanted, worn, wide-plank floorboards, the rectangular shape of the nail heads handcrafted by blacksmiths and the cracks in the front door that let in the winter drafts speak for its many years of weathering a hardscrabble life on the windswept prairie.

Living in a tourist attraction (which must be where the expression “living in a fishbowl” comes from) takes a special person. And since I live here, I guess that makes me special in that I can handle the daily foot traffic tromping across my front porch,I accept how strangers, unable to restrain their curiosity, peer into my windows . . . and I politely offer to snap the occasional photo of a couple striking the prerequisite pose in front of the Gothic window.

Out of the hundred-plus places I’ve ever lived, this is the first and only one where I signed a lease requiring that the “tenant shall treat the public in a friendly manner.” And mostly I am friendly. Except when I’ve had too many faces pressed up against the glass in my kitchen window. In which case, the white cotton curtain gets yanked across their hungry eyes, and I retreat to the most private room in the house: ironically, the upstairs bedroom, the one immediately behind the house’s main feature, the Gothic window.

Legend has it that this window—and the matching one on the opposite end of the second floor—was purchased via mail order from Sears Roebuck. The triangular shape of the paned glass attracted Grant Wood’s attention when he visited Eldon in 1930. He found it incongruous, if not pretentious, that such a simple white wooden farmhouse would be adorned with such an ornate, if not religious, window. Wood was so intrigued, he drew a sketch of the front of the house, returned to his art studio in Cedar Rapids, convinced his sister and his dentist to pose as the spinster daughter and dour father to represent the stoic, roll-up-your-sleeves-and-just-do-it, Midwest stereotype, painted the three individual elements onto one canvas, and the rest, as they say, is history. The house—and its window—is so famous that it attracts over 10,000 visitors a year to its remote Iowa location.

It is behind this window and its lace curtain that I sleep, dream, read, cry, snuggle with my two small dogs and escape the peering eyes of passersby. The lease also states “tenant agrees to maintain South Window curtains similar to those featured in Grant Wood’s American Gothic painting.” This is no problem, as the lace curtains came with the house. In the upstairs bedroom window, the showcase one, I simply hung white sheers over the lace curtain, which maintains the original appearance for the tourists’ photo opportunity, but adds a layer of privacy from the outside world, and keeps at bay the blazing Iowa sun, which rises around seven each morning over the neighbor’s soybean field.

On the weekends, when the weather is good, I sell pies out on the lawn of the house. I can’t say if this has ever been done before at the American Gothic House. Out of the many families that have lived here—the Dibbles, the Joneses, the Smiths—mine are certainly not the first pies to be baked inside. That would be impossible, seeing as Iowa is the pie capital of America, where pies are a way of life, baked into the fabric of Midwestern existence. Eldon, Iowa, is full of pie bakers. (I know this because I’ve sampled Arlene Kildow’s coconut cream pie. It would win first prize at the Iowa State Fair if she would enter. And Janice Chickering’s apple pie, which I haven’t tried yet, must be delicious because it wins every local pie contest.) But setting up a pie table right outside the famous house, as if it were an Amish farm stand or a Girl Scout bake sale? That might be a first.

I didn’t move into the American Gothic House to sell pies. Moving into the American Gothic House wasn’t in my plans at all. In fact, until that hot, humid, late August day that I happened upon the road sign for the house, I didn’t even know of its existence. I will tell you how and why I came to live here, how I became known as “America’s Pie Lady,” how I became adopted by the mayor and other residents of Eldon, and most important of all, how my grief began to ease and my heart eventually began to heal. I will tell you all that and more. But I have to begin further back in time.

You will find my story is a lot like pie, a strawberry-rhubarb pie. It’s bitter. It’s messy. It’s got some sweetness, too. Sometimes the ingredients get added in the wrong order, but it has substance, it will warm your insides and, even though it isn’t perfect, it still turns out okay in the end.

MAKING PIECE is available on Amazon, Barnes & Noble, Books a Million, IndieBound and other booksellers. Also available on Kindle.