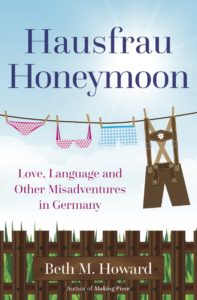 Hausfrau Honeymoon: Love, Language, and Other Misadventures in Germany

Order from Amazon. IndieBound or directly from your local bookstore or library.

When American journalist, Beth Howard, said she wanted to live abroad again, she didn’t mean Germany. And while she dreamed of being married, she certainly had no ambitions of being a housewife – or Hausfrau. But after a lust-filled, trans-Atlantic courtship, she moves to Germany to marry a corporate executive.

Arriving with fairy-tale-like optimism, she’s certain she can quickly learn the language and recreate her free-spirited lifestyle while being happily married – in an equal partnership. The Teutonic tongue, she discovers, is about as easy as deciphering DNA code. And, once she is living in his country, her husband expects her to stay home and have dinner ready.

“But you are living your dream!” her sister replies to her complaints. “You can have European adventures, and you can write.” Howard has adventures all right, and she’s written all about them in her lively narrative, Hausfrau Honeymoon.

This book was self-published. Curious about the process and want a few tips? Read my blog post.

As the plane descends, clusters of red-tiled rooftops emerge through the summer haze. Lush vegetable fields, mingling with the brick-and-stucco houses, create a Christmas card patchwork of red and green. Beyond the fields are forested hills, too low to be called mountains but high enough to want to drive up, not walk. The hills brim with more red-roofed houses, church steeples, and meadows like an illustrated page out of Hansel and Gretel. With every lost foot of elevation, the landing strip comes more clearly into focus, along with the flurry of activity on the ground. Cars zip along next to the 767 on roads paralleling the runway, service vehicles with blue emergency lights on top and words like Polizei and Unfalldienst in blazing letters on their sides. I’ve spent the entire flight imagining this new chapter of my life and how it will go. While I’ve lived and traveled all over the world, I have never moved anywhere for a man. Passion, however, is a powerful motivator and love can make you do things you didn’t think you were capable of. But will love be enough to make this work?

The landing gear is set, the flight crew is seated. I give my seatbelt an extra tug, as if it will secure me for what’s to come. And, at last, fourteen hours after setting off from Los Angeles, ready or not — THUD! — I have arrived.

Released from immigration, I claim my bulging blue duffel bags and wheel my cart past der Zollbeamte who gives me a nod that I’m free to enter my new country without paying customs on my freight of worldly possessions.

Out on the curb, I search the line of double-parked cars for his 1988 white Volkswagen Golf. For the next thirty minutes, the steady stream of traffic includes many Golfs—though none of them his—dozens of tan Mercedes-Benz taxis covered in advertisements, and several smaller makes of Volkswagens not sold in the States. Surprisingly, I see no Beetles, but maybe it’s just as well.
I sold my own Beetle just days before. It was my first new car, a silver one with leather seats, that I could finally afford after a dot-com job rescued me from a lifetime of credit card debt; I’d driven it straight off the showroom floor.

“But you’re moving to Europe. You are making room for the new,” my sister told me as I watched my beloved Bug pull away with its new owner. “You’re living your dream to get married and live overseas. You’re going to have new adventures.”

My co-worker Wendy had stated it more firmly: “You have to go for the whole thing. If you keep your car it’s like keeping one foot out the door. Besides, you’ll be in Germany. You can get a Mercedes.”

A touch on my elbow causes me to spin around, coming face to face with the purpose of my journey: Marcus. His striking features—thick, brown hair, green eyes shaped like oversized almonds, full lips, a complexion hinting at a trace of Spanish blood, and a soccer build that fills out his hand-tailored wool suit—conspire to dissolve my apprehension. His hand on the back of my head pulls my mouth to his long enough for me to fall under his spell.

“My meeting went late,” he says as casually as if we were meeting for coffee.

We reach the car—in immaculate condition for its age—and I reach for one of my bags, preparing to heave it into the hatchback.

“No, let me do it,” he says, prying my hands off of the nylon straps. While he’s forcing my first bag to fit, thus too distracted to protest, I pull the second beastly duffel off the cart.

The first time I heard of this city I was sixteen and living in Davenport, Iowa. My dad was driving me to school in the physical manifestation of his mid-life crisis—a cherry red Porsche 911. It was a week after my parents were summoned to the principal’s office to resolve my “increasingly disruptive behavior” so that I might complete my Catholic education. The three-mile drive began with, “I don’t think hanging around with that Troy Martin is good for you,” referring to my bike-racer boyfriend.
I looked down at my wrinkled plaid uniform and ran my fingers over the “It’s Better in the Bahamas” patch—sewn over the hole I burned from holding the iron down too long against the polyester. “How does Kathy Stemlar get her pleats so perfect?” I wondered as my dad continued.

“You’re a smart girl and you like to travel; you could be a dental hygienist or an executive assistant.”

I raised my eyebrows, but didn’t utter what I was thinking: “Why not a dentist or CEO, Dad?”

Averting my attention to the dashboard, I fixated on a tiny metal plaque attached to the glove box. Closer examination revealed it was a coat of arms dominated by a rearing black stallion and the car’s brand name painted in block letters above. I squinted to read the smaller letters above the horse’s head, the name of the town where the car was made.

“If you marry some poor farm boy, Boo, you’re gonna have your ass in a sling,” he went on.

Stuttgart. The birthplace of the automobile. The industrial manufacturing center of Germany. The capital of the country’s most conservative state Baden-Württemburg. The bombing target of allied forces during World War II. My new home.

“I always forget how beautiful it is here,” I say, opening the sliding glass door and stepping out onto the balcony. Marcus, who has already removed his tie and opened a bottle of pilsner, moves in behind me, wrapping me in his arms.

His one-bedroom bachelor pad sits on top of a vineyard; green, leafy vines cling to the sides of a steep valley whose bottom is a slow-moving, murky river called the Neckar. The river divides our village of Bad Cannstatt from Stuttgart’s city center. On its near shore, the smokestack of the regional power plant puffs steam into the sky. On the far shore, high-rise offices and apartment blocks, along with a few historical remnants of churches and castles, cram together in a disorganized sprawl.

“I can’t see your office,” I say to Marcus, searching the cityscape for the giant revolving illuminated logo of his employer. “There’s the factory, but I don’t see your star.”

“You can only see it in the winter from here.” He guzzles half his beer and after a few more minutes of silent gazing—mutual wonder of what promise lies ahead out there—he says, “Oh! I have a present for you.” He rushes inside and returns with an envelope. I pull out a certificate that reads Deutsch für Anfänger, 1.Juli bis 1.August. “It’s an intensive German class, to help you get settled. Welcome to Germany. Or, I should say, Willkommen in Deutschland.”

“Thank you!” I say. “I was hoping to find a beginner’s class exactly like this.” I look at the card closer. “Wait, does that say it starts July 1st?” He nods. “That’s next week. Well, I might as well dive right in.”

A breeze from France rustles the leaves of the chestnut tree in front of the building. We kiss as the church bells clang eight times to mark the hour, then he whispers in my ear the words we’ve both been anticipating for a month: “Let’s go to bed.”